MANILA, Philippines – Ivan Guerrero is a tinkerer. His hands are those of a maker’s; whether in designing LEGOS or directing the latest commercials for his clients, he has always had the passion for it.

Guerrero tells adobo magazine his beginnings in the advertising industry, how the path began when he scored an internship in McCann while studying at the University of Asia and the Pacific.

“I was really able to explore the craft of advertising, and gain more exposure working with different directors who are now pretty well-known directors in advertising,“ shared Guerrero.

It was then that he realized his love for film craft; and decided to take further studies under Marilou Diaz Abaya’s tutelage in Asia Pacific Film Academy (APFI). He eventually transferred to the States for a broadcasting program in Purdue University Northwest, where dabbling in videos became his creative outlet.

“It’s always a bit tricky to stand out there, there’s so many people in the industry who are vying for creative attention,” said Guerrero when he was playing around with trailers.

Premakes, as he came to call them, are trailers of modern movies made from old movie clips, anchoring on the notion that everything contemporary is a remix of narratives and cinematographic styles. He reimagines the films with older movies that are reminiscent of it and deconstructs them with it.

“I found a niche for myself when I started making these short video essays, and it got quite a bit of attention.”

His premakes got attention of publications like TIME Magazine, Washington Post, and New York Times but it did not stop there. There was one person whose particular attention made a mark on him. “I got a phone call in the middle of the day, just a very unassuming phone call,” recalled Guerrero in a eulogy he wrote when the icon passed away.

“The voice was raspy but jovial. It was a voice I had unmistakably heard from my childhood, mostly from old episodes of the Incredible Hulk cartoon and The Marvel Action Hour. I recognized it instantly.” And it was the Stan Lee that put him up to a challenge. Guerrero continued, “He said something that kind of stays with me to this day: I can’t wait to see what you do next.”

Guerrero spent the next few years kickstarting a production company that creates digital content for its clients. In addition to that, he is a partner at the comic books store, Filbar’s. “We always had an interest in comics, just this passion for storytelling and good stories, and we wanted to bring back the Filbar’s of our youth.”

In the same sense that he re-purposed old films to do premakes, Guerrero found himself with an old toy that is uniquely creative, LEGOs. “I just wanted to do something that I had not touched since I was a very young kid. I just fell in love with the craft of putting things together in different combinations.”

LEGO Ideas is the toymaker’s initiative to get more people designing, particularly making new sets for their stackable bricks. The program enables interested designers to send in their pitches, upload them on the LEGO Ideas website and get upvotes from other users. Designs that receive a certain amount of votes will be reviewed, and if certain criteria are met will eventually be manufactured by LEGO and released for retail.

Guerrero, finding out about the program, decided to come up with a set for a show he watched since he was a child — Sesame Street. There were months of re-watching specific episodes, and painstakingly researching on 123 Sesame Street, the fictional building where the show’s characters lived.

“I wanted to do something that people had not seen before,” he told adobo magazine. “Sesame Street is a brand that has a 50-year heritage, it’s a pop culture icon that has really shaped not just kids but the whole culture of creatives. A lot of creative people would say that it was their exposure to Sesame Street, reading, writing, counting, and learning about stories that started them on this creative path.”

From then, it was only a matter of time before his creation gained enough votes to go under production. “I got a phone call from them and it was quite exciting. I literally dropped on the floor from the call. I had not expected Sesame Street to win, it had made it to the 10,000 mark”

The set will be complete with beloved characters from the series: Bert and Ernie, Big Bird, Oscar the Grouch, Cookie Monster and Elmo. Asked about the difficulties he encountered while developing the set, Guerrero said that it was discipline that weaved together the Sesame Street set from scratch to dot.

“I’m very tough on myself creatively. And so, I’m always pushing myself to go a little bit further, and when I create a project.”

Currently, Guerrero keeps his upcoming projects under wraps, as his is a competitive world. However, he wants to inspire young creatives to find their own unique niche, saying: Find your craft and be the best at it — be the best person in the world at it.

LIA 2019: McCann Worldgroup Philippines and GIGIL Make it to the Shortlist of London International Awards 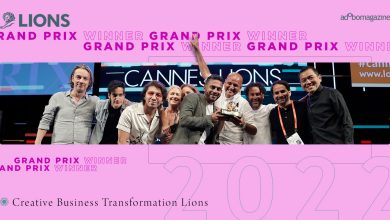 adobo Exclusive: Global President Suzanne Powers on how McCann Worldgroup is manifesting a vision through agency culture and conscious inclusion

Cannes Lions 2022: Grand Prix Showcase — Check out all the winners from USA and Latin America